Atlast, after discussing with the mentors, I finally found the correct design solution for including the Optimizers in the existing framework and the design seems to be feasible.

Current workflow of one step of Optimizer’s update:

Design Issues and its solutions:

1) How to identify the type of update in the class VGeneralLayer like SGD or Adam etc ?

The current implementation by default performs only the schocastic gradient descent update. And there is no way of identifying the type of update depending on the type of Optimizer. So the solution would be to pass the reference to the Optimizer object from the class MethodDL down to the class VGeneralLayer.

2) Where to store the additional variables like sum of past gradients and other parameters specific to each Optimizer ?

3) Should we need to move the update function from the class GeneralLayer to Optimizer class ?

Yes, we should move the update function to the Optimizer class since its the responsibility of the Optimizer to perform such an update.

4) Do we really need to test the convergence in the Optimizer class itself or move it to the train() method of class MethodDL ?

Modified workflow of one step of Optimizer’s update:

1) Modify the Struct TTrainingSettings to include the option for optimizer. 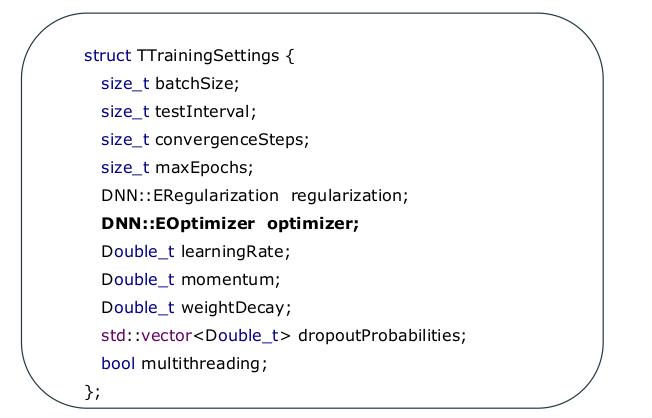 2) Create an instance of the particular type of optimizer in the Train() method based on the option specified. If no option is specified, default choice would be to use Adam optimizer. 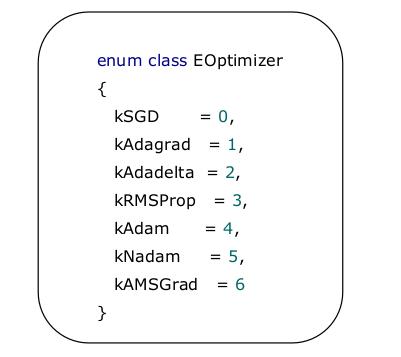 1) Create a base class TOptimizer with the basic functions. ( Refer to the class diagram below. )

2) Create various classes like Class TSGD, Class TAdam etc for each optimizer extending from the base Class TOptimizer.

3) Re-implement the existing Class TDLGradientDescent with the new design as Class TSGD. 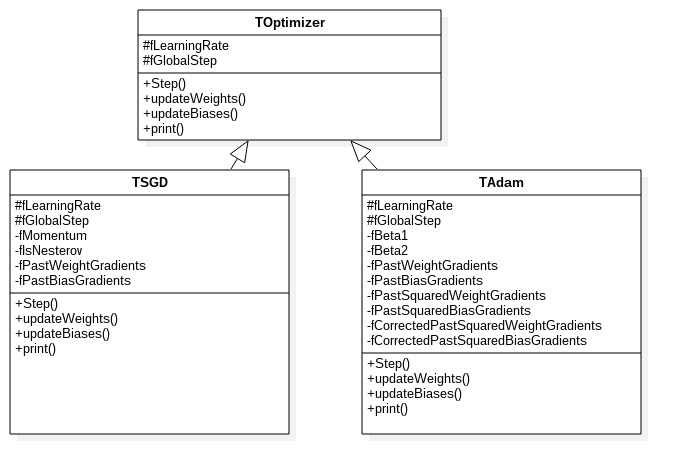 I hope that this post helps to get a clear understanding of the new design and its workflow. And atlast I can start coding :D . So my next goal is to re-implement the basic stochastic gradient descent with my new design along with unit tests and make sure everything works good. So, from my next post, I’ll describe more related to coding :P